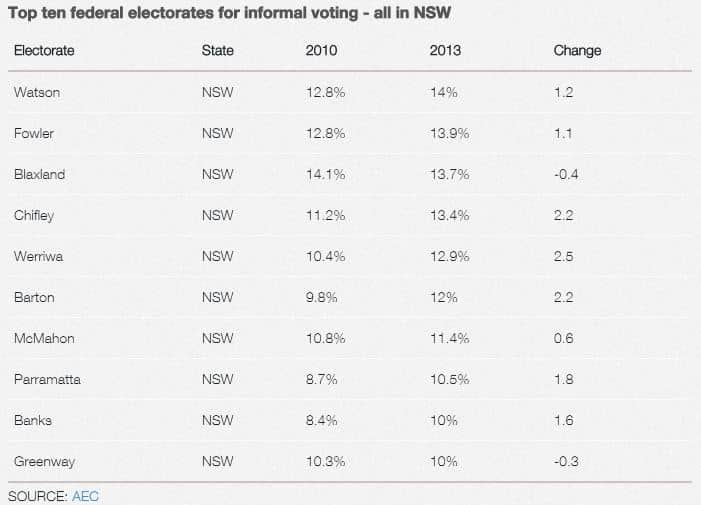 Informal votes should not be a third force in Australian politics – but they could change the result of the election on July 2.

The last federal election in 2013 should have been the most engaged in Australian history – with a cast of Game of Thrones proportions.

Full of intrigue and bloodshed: Australia’s first female prime minister, cut down by the man she deposed three years earlier, they face a ferocious warrior, an opposition leader with a polarising personality. But the open warfare between Gillard and Rudd turned the Labor Government into a lurching Hodor, destined to be torn down by an unstoppable Abbott and his army of White Walkers.

The political war made for lead stories on the evening news, countless column centimetres in print and online, as well as damning commentary on talkback radio. You would have expected the intense coverage to translate into record engagement at polling booths. But it didn’t.

While the turnout rate was low, the House of Representatives informality rate – the number of incorrect votes as a percentage of total votes – was 5.9 per cent, the highest in three decades. To be formal, voters must number every box with a series of consecutive numbers starting with ‘1’ being the first choice on the green ballot paper.

NSW was the biggest contributor to the national result, accounting for all of the top 10 electorates with the highest informality rates. Chifley, Werriwa and Barton recorded rocketing informality rates in 2013, with increases of 2.2 per cent or more between the 2010 and 2013 elections.

Watson recorded the highest informality rate at 14 per cent, more than double the national average. The electorate is represented by Tony Burke, Shadow Minister for Finance, and takes in southwestern Sydney suburbs that include Ashfield, Greenacre, Campsie, Lakemba, parts of Canterbury and Bankstown. The 14 per cent informality rate translates to 12,814 informal votes. If informality was a party, in 2013 it would have come third in Watson behind Labor’s Tony Burke (39,126) and Liberal’s Ron Delezio (30,617), and triple the vote of The Greens (4,171).

The Liberal party’s most marginal seat of Barton is held by Nickolas Varvaris on a waver thin margin of 0.3 per cent. The Barton electorate takes in Hurstville, home to more Chinese-Australians than any other suburb in Australia, where more than half the population are of Chinese ancestry. Both Liberal and Labor candidates polled over 32,000 primary votes at the last election. The 12 per cent informality rate in Barton, which is 10,948 in actual numbers, could have changed the result in that electorate.

Similarly in Parramatta, Labor’s second most marginal seat on a margin of 0.6 per cent, if the 9,474 informal votes were cast correctly and they were directed to one party, it could have resulted in a Liberal win, or turned it into a safe Labor seat.

It’s yet to be seen if changes in 2016, such as printing logos on ballot papers will affect informality in the House of Representatives, or if the Senate voting reforms will reduce or increase the Senate informality rate.

Why is informality so high in NSW?

NSW is Australia’s most multicultural state, where almost one in four residents speak a language other than English at home. There is a clear correlation between the rate of informality and low English proficiency – seven of the top 10 low English proficiency electorates are also in the top 10 electorates that have the highest informal vote rates. 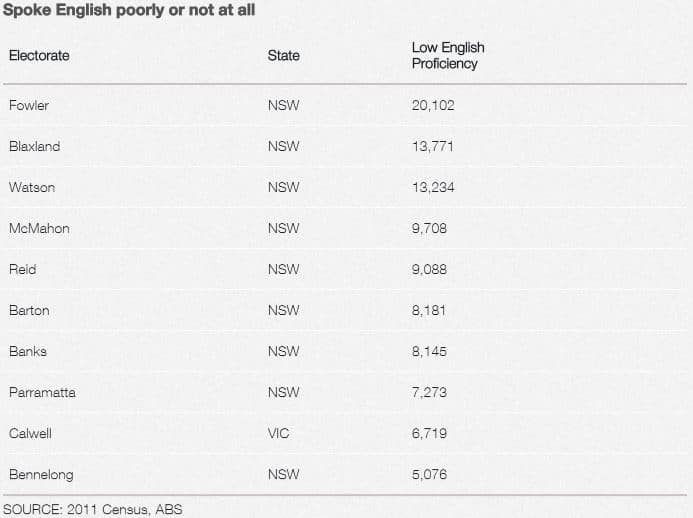 An analysis of informal voting in the House of Representatives conducted after the 2010 federal election by the AEC (Australian Electoral Commission) found “a statistically significant link between English language proficiency and informality rates. Divisions where higher proportions of the population have lower levels of English language proficiency are likely to have higher levels of informal voting.”

The AEC found a stronger correlation between English language proficiency and informality than other commonly cited contributors, such as the number of candidates, differences between federal and state voting systems and proximity of state or local elections to federal elections.

Many migrants flee totalitarian regimes in search of democratic freedom. Ironically, record numbers of these migrants have not been able to fully exercise their democratic privilege.

Where marginal seats are in areas of high cultural diversity – Barton and Parramatta are just two – reducing the informality rate could see a different House of Representative candidate elected. In closely contested elections, and the polls are indicating 2016 will be a tight race, reducing the informality rate could potentially lead to a different party in government.

Reducing the informality rate isn’t a “warm and fuzzy” initiative to educate migrants with low English skills on how to vote. Informality should not be a third force in Australian politics. It’s about upholding Australia’s democratic system, making sure the will of the people are reflected at the ballot box by electing the government they want at the end of the day.

Thang Ngo served as a local councillor in Fairfield for nine years (1999-2008). He is managing director of IDENTITY Communications, part of IPG Mediabrands, and publishes the noodlies food blog.