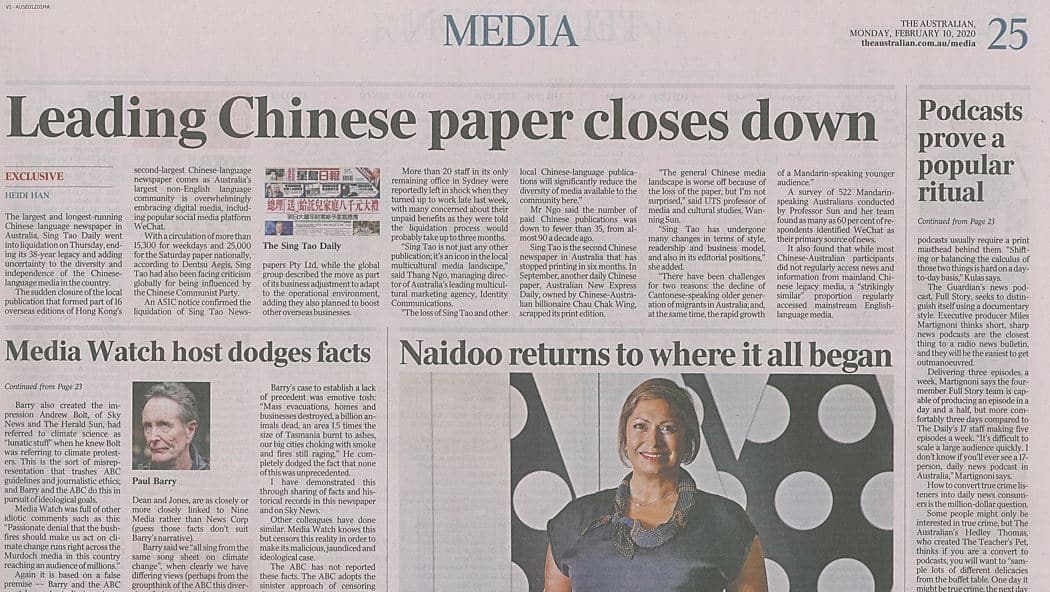 The largest and longest-running Chinese language newspaper in Australia, Sing Tao Daily went into liquidation on Thursday, ending its 38-year legacy and adding uncertainty to the diversity and independence of the Chinese- language media in the country.

With a circulation of more than 15,300 for weekdays and 25,000 for the Saturday paper nationally, according to Dentsu Aegis, Sing Tao had also been facing criticism globally for being influenced by the Chinese Communist Party.

An ASIC notice confirmed the liquidation of Sing Tao News papers Pty Ltd, while the global group described the move as part of its business adjustment to adapt to the operational environment, adding they also planned to boost other overseas businesses.

More than 20 staff in its only remaining office in Sydney were reportedly left in shock when they turned up to work late last week, with many concerned about their unpaid benefits as they were told the liquidation process would probably take up to three months.

“The loss of Sing Tao and other local Chinese-language publications will significantly reduce the diversity of media available to the community here.”

Mr Ngo said the number of paid Chinese publications was down to fewer than 35, from almost 90 a decade ago.

“The general Chinese media landscape is worse off because of the loss of the paper, but I’m not surprised,” said UTS professor of media and cultural studies, Wanning Sun.

“Sing Tao has undergone many changes in terms of style, readership and business model, and also in its editorial positions,” she added.

“There have been challenges for two reasons: the decline of Cantonese-speaking older generation of migrants in Australia; and, at the same time, the rapid growth of a Mandarin-speaking younger audience.”

A survey of 522 Mandarin-speaking Australians conducted by Professor Sun and her team found as many as 60 per cent of respondents identified WeChat as their primary source of news.

It also found that while most Chinese-Australian participants did not regularly access news and information from mainland Chinese legacy media, a “strikingly similar” proportion regularly accessed mainstream English-language media.